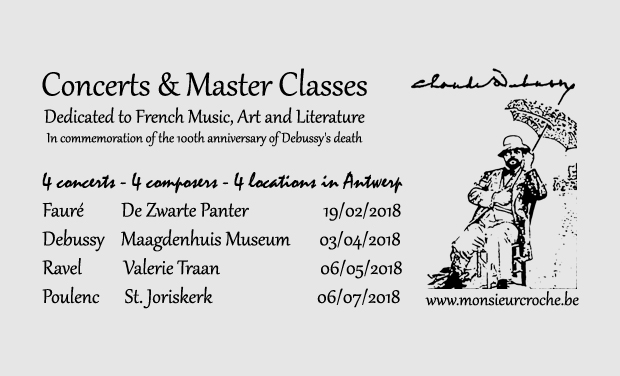 Influenced by Wagner but also by the Parisian tradition of Chopin and Liszt, Fauré wrote music that can be seen as a transition from the late German Romanticism of Brahms to the French Impressionism of Debussy. He composed song cycles based on lyrics written by Jean de La Ville de Mirmont, Victor Hugo, Paul Verlaine and more.

Sodi Braide (piano, UK/France) was one of the performers for this concert and he gave a masterclass at music academy Wilrijk. He is a British-Nigerian cosmopolitan pianist and won prices in some of the most prestigious competitions such as Leeds (UK) and Van Cliburn (USA). Sodi is an assistant professor at the École normale de musique de Paris-Alfred Cortot. 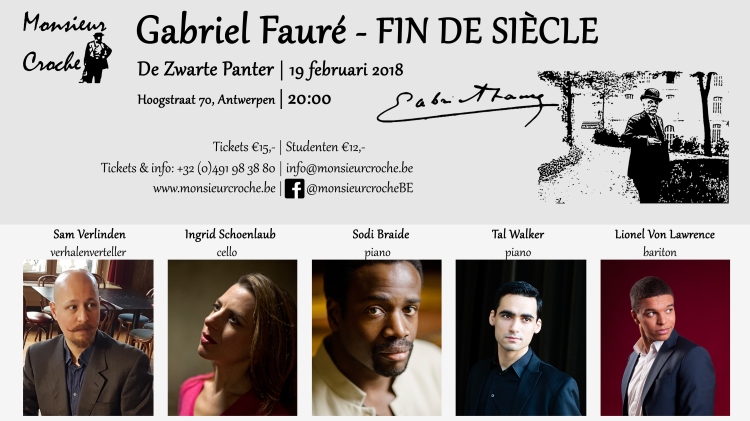 In this concert, we have presented some of the Debussy’s most popular pieces as well as some of his late and intriguing pieces. For instance, Debussy’s preludes for piano are perhaps his most imaginative pieces and are considered to be the ultimate representations of his style and development as a composer.

Françoise Thinat and Antonio Galera Lopez have performed at the concert and each of them gave a masterclass. Françoise Thinat is an internationally acclaimed French pianist. She is a winner of numerous prizes, a professor at the École normale de musique de Paris-Alfred Cortot and the president of the Orleans international piano competition.

Antonio Galera Lopez is one of the most promising young performers in Spanish musical circles. He is a prize-winner of several competitions and graduated with diplôme de concertiste, the highest degree awarded by the École normale de musique de Paris-Alfred Cortot.

The Maagdenhuismuseum hosted this concert. Set in a building that dates back to the 16th-17th century and which used to be an orphanage for girls, it now hosts the art collection of Antwerp’s Public Centre for Social Welfare (OCMW). 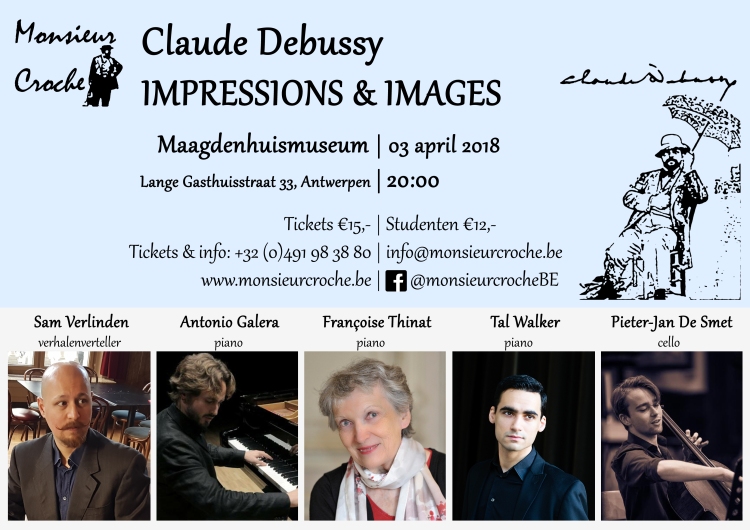 Ravel was perhaps the only composer in Debussy’s time to write in the same style (which we now call impressionistic). They both lived in Paris, belonged to the same circles and knew each other’s music. Ravel was known for his virtuosic piano writing and imaginative inspirations, which was combined with Gallery Valerie Traan’s philosophy through literature, poetry and visual arts.

The masterclass was be given by Eliane Rodrigues who also performed in the concert. She is a renowned Brazilian-Belgian concert pianist. A laureate of Queen Elisabeth competition in Brussels, she is a key figure in the Swiss “Música Romântica” festival and a piano professor at the Royal Conservatoire of Antwerp.

For this concert, Monsieur Croche was be received by the Gallery Valerie Traan, an art gallery for objects, subjects and themes. The gallery often balances on the dividing line between design, art and architecture. 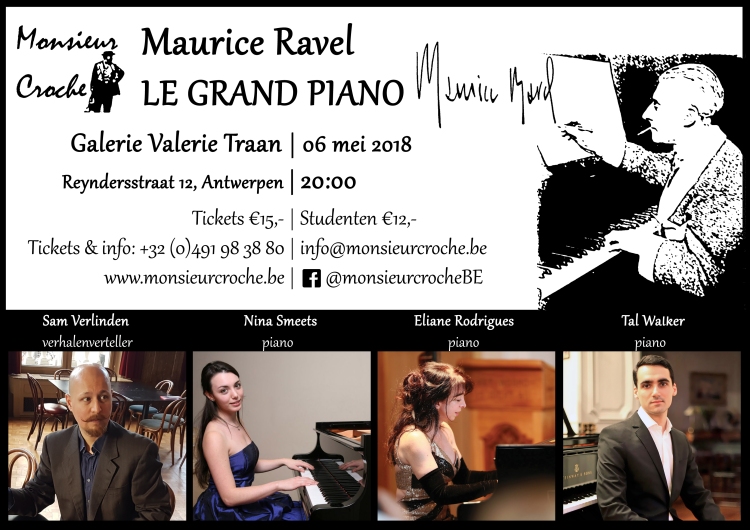 Poulenc discovered Debussy’s music when he was eight years old and was fascinated by its originality. Influenced by the great tradition of French composers, Poulenc’s music has two sides: lighthearted and joyful; serious and expressive. We feel his music is best expressed in his chamber music pieces, since his use of multiple instruments makes it easier to introduce his often varying aspects and characters.

Monsieur Croche’s final concert was presented at Sint Joriskerk, one of the most beautiful Roman Catholic churches in Antwerp, which dates back to the 14th century. 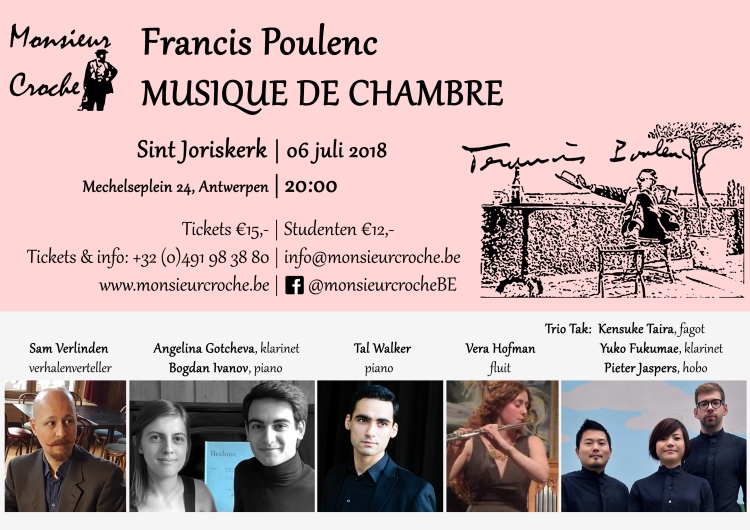 Each of the four concerts was narrated by musician, performer and linguist Sam Verlinden. 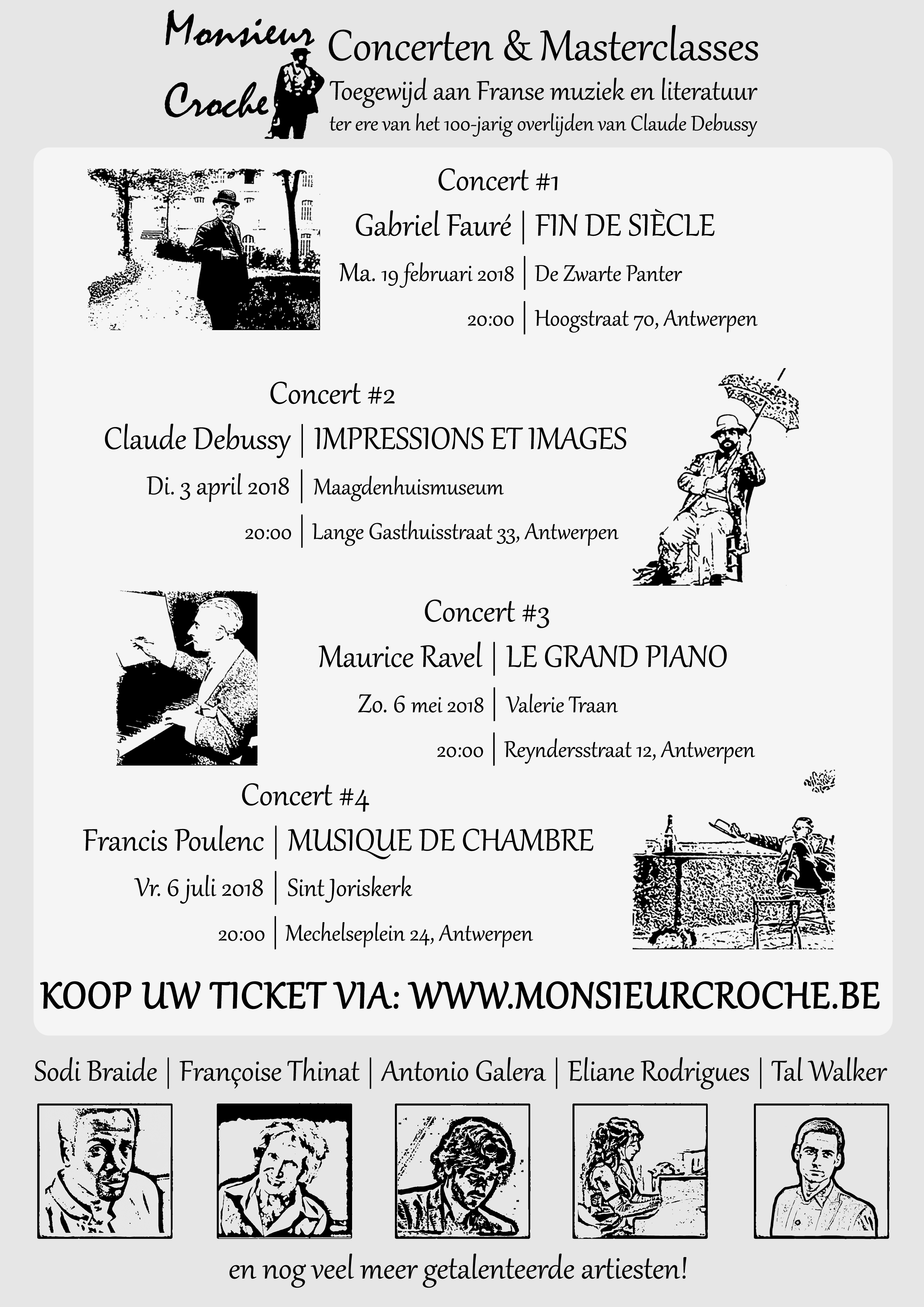